Since movie Point Break released in 1991, masks and Presidents were associated with bank robbers: 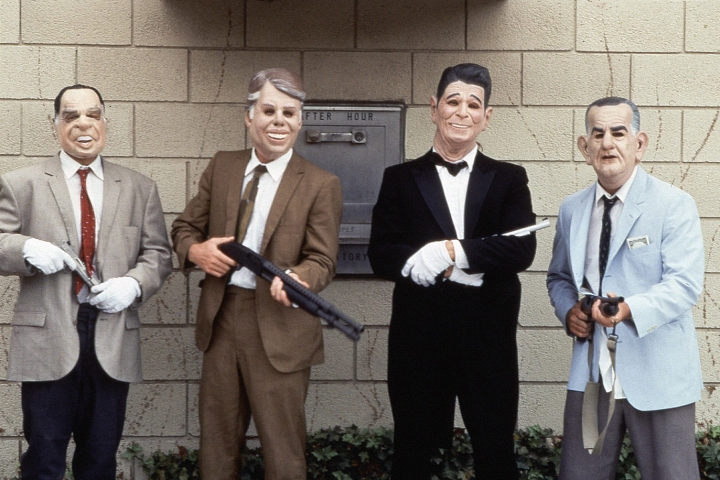 The leading Presidential candidates cover their faces with black masks: 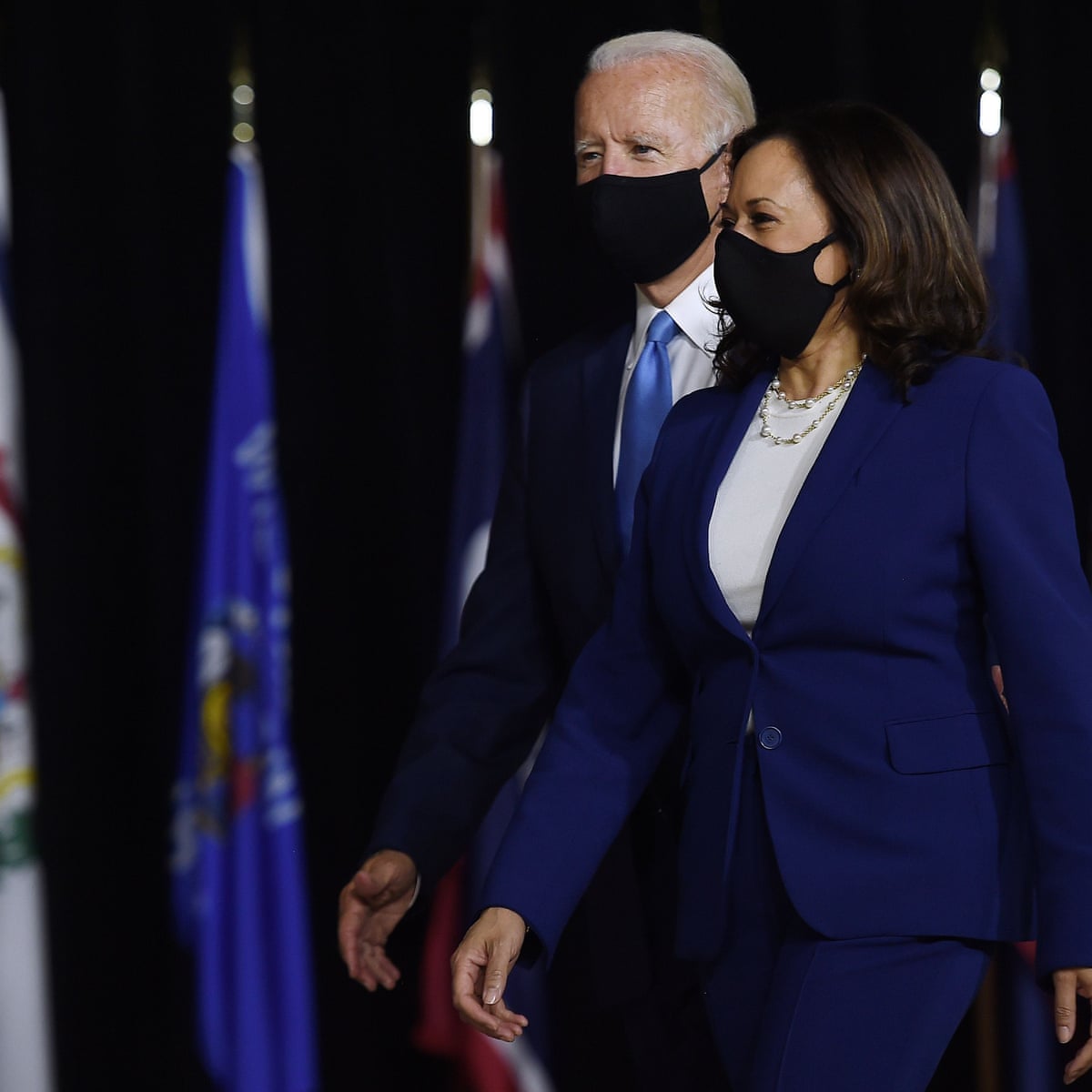 ~~~~~~~~
https://youtu.be/xNc-xhH8kkk?t=2546
[42:26]
Director's Law is that almost invariably government programs benefit the middle-income class at the expense of the very poor and the very rich.
...
[43:28]
People who are at the bottom tend to be much less skillful in political activity for the very reasons that leave them at the bottom in the economic scale. They are at the bottom in the economic scale because they have low skills or low abilities or low entrepreneurial capacity, or have been unfortunate to have been born handicapped or in groups that are discriminated against. But these same features make them relatively less effective in political activity.
...
[44:14]
Why the coalition does not come from the top all the way down 51 percent?
Well, then answer is that gee, those people at the top - that's a place we can get a lot of money from, and it's worth sactificing a few votes to get a large fraction of a tax base.
And therefore, the logically most reasonable coalition is sort of 51 percent of the people, running from the lower middle class through the upper middle class and leaving out the very rich at the top and the very poor at the bottom.
~~~~~~~~

2) I knew that buisness was not responsible for the Great Depression in 1929.
But I did not know that it was exactly Federal Reserve System that was responsible for converting minor recession into major Depression by mishandling money supply.

3) I underestimated how misleading social security system is (in particular, misuse of word "contribution").

4) I already knew that there is "no free lunch" in handouts.

5) I knew that middle class benefits politically from being in the middle of economic interests of the rich and the poor, but I did not know how strong these benefits are.
The middle class, clearly, gets a lot of benefits to themselves. Originally posted at: https://dennisgorelik.dreamwidth.org/194983.html

I agree with Matt Mahoney that "we don't want to admit the mistake", but that is too simplistic explanation of why we had (and still have) such strong anti-covid restrictions.

There are big positive side effects of these anti-covid restrictions:
1) Big shift to remote work and remote education.
Because of anti-covid restrictions, in several months we moved to remote work as much as we would have moved in ~10 years.
2) "Safer meetings" culture.
That reduced spreading of contagious deseases.
People are getting infected [with other desises] significantly less frequently now.

These positive side effects help our society to tolerate anti-covid restrictions. Originally posted at: https://dennisgorelik.dreamwidth.org/194589.html

About 1% of people are interested in the behind-the-scenes. Originally posted at: https://dennisgorelik.dreamwidth.org/194510.html

~~~
https://www.aier.org/article/open-letter-from-medical-doctors-and-health-professionals-to-all-belgian-authorities-and-all-belgian-media/
The current crisis management has become totally disproportionate and causes more damage than it does any good.

We call for an end to all measures and ask for an immediate restoration of our normal democratic governance and legal structures and of all our civil liberties.

‘A cure must not be worse than the problem’ is a thesis that is more relevant than ever in the current situation. We note, however, that the collateral damage now being caused to the population will have a greater impact in the short and long term on all sections of the population than the number of people now being safeguarded from corona.
...
Our immune system
Overly hygienic measures have a detrimental effect on our immunity.
Only people with a weak or faulty immune system should be protected by extensive hygiene or social distancing.
...
Mortality turned out to be many times lower than expected and close to that of a normal seasonal flu (0.2%)

The number of registered corona deaths therefore still seems to be overestimated.

There is a difference between death by corona and death with corona. Humans are often carriers of multiple viruses and potentially pathogenic bacteria at the same time. Taking into account the fact that most people who developed serious symptoms suffered from additional pathology, one cannot simply conclude that the corona-infection was the cause of death. This was mostly not taken into account in the statistics.
...
Masks
Oral masks in healthy individuals are ineffective against the spread of viral infections.

Wearing a mask is not without side effects.
Oxygen deficiency (headache, nausea, fatigue, loss of concentration) occurs fairly quickly, an effect similar to altitude sickness. Every day we now see patients complaining of headaches, sinus problems, respiratory problems and hyperventilation due to wearing masks. In addition, the accumulated CO2 leads to a toxic acidification of the organism which affects our immunity. Some experts even warn of an increased transmission of the virus in case of inappropriate use of the mask.

Our Labour Code (Codex 6) refers to a CO2 content (ventilation in workplaces) of 900 ppm, maximum 1200 ppm in special circumstances. After wearing a mask for one minute, this toxic limit is considerably exceeded to values that are three to four times higher than these maximum values. Anyone who wears a mask is therefore in an extreme poorly ventilated room.
Inappropriate use of masks without a comprehensive medical cardio-pulmonary test file is therefore not recommended by recognised safety specialists for workers.

Vaccine
Survey studies on influenza vaccinations show that in 10 years we have only succeeded three times in developing a vaccine with an efficiency rate of more than 50%. Vaccinating our elderly appears to be inefficient. Over 75 years of age, the efficacy is almost non-existent.

Due to the continuous natural mutation of viruses, as we also see every year in the case of the influenza virus, a vaccine is at most a temporary solution, which requires new vaccines each time afterwards. An untested vaccine, which is implemented by emergency procedure and for which the manufacturers have already obtained legal immunity from possible harm, raises serious questions.
We do not wish to use our patients as guinea pigs.

On a global scale, 700 000 cases of damage or death are expected as a result of the vaccine.

If 95% of people experience Covid-19 virtually symptom-free, the risk of exposure to an untested vaccine is irresponsible.

...
Media
War terms were popular and warlike language was not lacking. There has often been mention of a ‘war’ with an ‘invisible enemy’ who has to be ‘defeated’. The use in the media of phrases such as ‘care heroes in the front line’ and ‘corona victims’ has further fuelled fear, as has the idea that we are globally dealing with a ‘killer virus’.
The relentless bombardment with figures, that were unleashed on the population day after day, hour after hour, without interpreting those figures, without comparing them to flu deaths in other years, without comparing them to deaths from other causes, has induced a real psychosis of fear in the population. This is not information, this is manipulation.
~~~

I knew that many justifications of Covid-19 panic were wrong.
But it turned out that almost all scary claims about Covid-19 being significantly more dangerous than influenza -- were a lie.

I think that, finally, I got a clear picture of what exactly Salesforce.com automates.

1) The first step is to clearly define your ideal customer profile.

3) Email campaigns.
And you send out "a lost puppy" type of email.
Here you are asking someone to direct you to the right person about your offering.
You are not selling anything, so it takes pressure off from the interaction.
Then you send a new email saying that so-and-so referred you.
Now it is not a cold email anymore, but rather a referral.

3) Sell the dream.
The next step is to have a live call where you sell the dream.
Get information about the prospect's goals, and help them connect their needs to your solutions.
Once they see and believe the dream - they will do the selling for you.

A significant part of this process is to build an email list of prospective customers (leads).
So a big part of Salesforce product is email list management. Originally posted at: https://dennisgorelik.dreamwidth.org/193944.html

I got tired of noisy Biden vs Trump campaigns and zoned out.
I was thinking that like in 2016 election there will be Libertarian candidate.
Today I made a quick check, and here we are -- my libertarian candidate is available for 2020 Presidential elections:
~~~~~
https://en.wikipedia.org/wiki/Jo_Jorgensen
Jorgensen calls for deregulation, arguing that it would reduce poverty. She supports cutting government spending to reduce taxes.
~~~~~

I set up an account yesterday, posted a number of jobs with you and now cannot access my account. It is saying my username and or my email are not recognised.

Moira,
We do not allow MLM "job" postings.

Thank you for your email. I’m not an MLM business. We are a direct sales business. Please review the about us link below.

I look forward to hearing from you with regards to my account being reinstated.

It is not an MLM business, how can I assist you with understanding that we are different?

Please tell me, what is the key sign of MLM business that clearly indicates that it is not a regular business? [*]

The level of communication from when I had notice of my inability to log in till now is not one of a business that I feel I want to partner with.

I sense from your emails that you are not looking to have an open mind set to any dialogue. I appreciate you are busy so I will not keep you any longer.

[*] The answer to my question that Moira failed to give:
----
https://en.wikipedia.org/wiki/Multi-level_marketing
the revenue of the MLM company is derived from a non-salaried workforce selling the company's products/services, while the earnings of the participants are derived from a pyramid-shaped or binary compensation commission system.
---- Originally posted at: https://dennisgorelik.dreamwidth.org/193184.html

~~~~~~~~~
https://www.npr.org/2020/08/24/905423648/navalny-was-poisoned-but-his-life-isnt-in-danger-german-hospital-says
Alexei Navalny, one of Russian President Vladimir Putin's most prominent critics, was poisoned by an unknown substance from a group of drugs that affect the nervous system, according to the German hospital that is treating the Russian opposition leader.

The drug is a cholinesterase inhibitor, meaning it disrupts the body's ability to break down acetylcholine — an important neurotransmitter in the brain and body.

Navalny remains in a medically induced coma in intensive care.

"While his condition is serious, it is not currently life-threatening," the Charité Universitätsmedizin in Berlin says.

Navalny is now being treated with an antidote called atropine; the medical team says there's a possibility for long term-effects on his health and particularly his nervous system.
~~~~~~~~~
https://en.wikipedia.org/wiki/Acetylcholine
Acetylcholine (ACh) is an organic chemical that functions in the brain and body of many types of animals (and humans) as a neurotransmitter—a chemical message released by nerve cells to send signals to other cells, such as neurons, muscle cells and gland cells.
~~~~~~~~~

Omsk's hospital was not able to detect this cholinesterase inhibitor poison.
Was it due to incompetence or due to political pressure? Originally posted at: https://dennisgorelik.dreamwidth.org/192856.html
Collapse