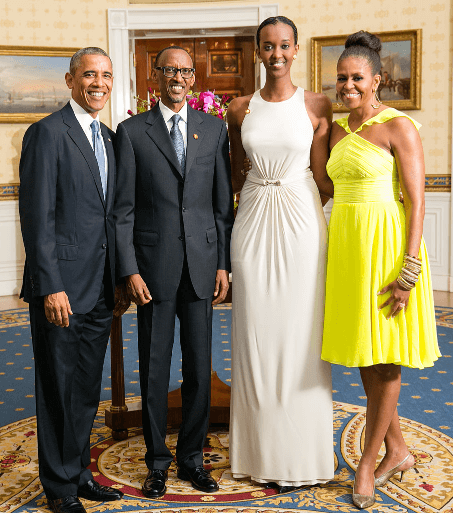 To the right of Barack Obama - Paul Kagame with his daughter.

Back in 1994 Paul Kagame ordered shooting presidential plane. That assassinated Rwandan President Habyarimana and some other top politicians. That assassination sparked infamous Rwandan Genocide against Tutsi population.
Paul Kagame led RPF to take control over Rwanda. That ended the genocide.

After taking over Rwanda Paul Kagame takes position of the Vice President with his friend Pasteur Bizimungu becoming puppet President. 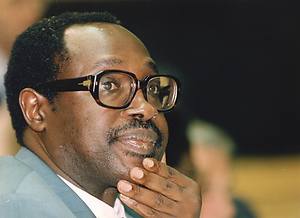 Pasteur Bizimungu
---
https://en.wikipedia.org/wiki/Pasteur_Bizimungu
Pasteur Bizimungu (born 1950) was the fifth President of Rwanda, holding office from 19 July 1994 until 23 March 2000.
...
A Hutu, Bizimingu was born in the Gisenyi prefecture of Rwanda.[1] According to the academic Filip Reyntjens, Bizimungu had ties to radical anti-Tutsi groups as a student in the 1970s, but later joined the RPF. He served as President of Rwanda after the 1994 Genocide.
...
In July 1994 the RPF gained control of the country and established a national unity government. The RPF leader, Paul Kagame, was chosen as vice president, and Bizimungu became president.

During Bizimungu's administration, many believed that he was merely a figurehead, and Kagame held the real power.
Bizimungu soon found himself in conflict with Kagame over what Bizimungu argued was unjustified repression of dissent.
...
Bizimungu resigned in March 2000 in a dispute over the make-up of a new cabinet, and Kagame became president.
...
In May 2001, Bizimungu founded a new political party, the Party for Democratic Renewal (PDR). It was almost immediately banned by the government, which accused it of being a radical Hutu party. Bizimungu was arrested.
He was placed under house arrest for continuing the operations of the party on 19 April 2002 and charged with endangering the state. On 7 June 2004 he was sentenced to 15 years in prison for attempting to form a militia, inciting violence, and embezzlement.
...
He was released on 6 April 2007, having been pardoned by Kagame. Kagame gave no explanation of the pardon.
---

===
https://en.wikipedia.org/wiki/Paul_Kagame#Economy
Rwanda's economy has grown rapidly under Kagame's presidency, with per-capita gross domestic product (purchasing power parity) estimated at $1,592 in 2013, compared with $567 in 2000.
===